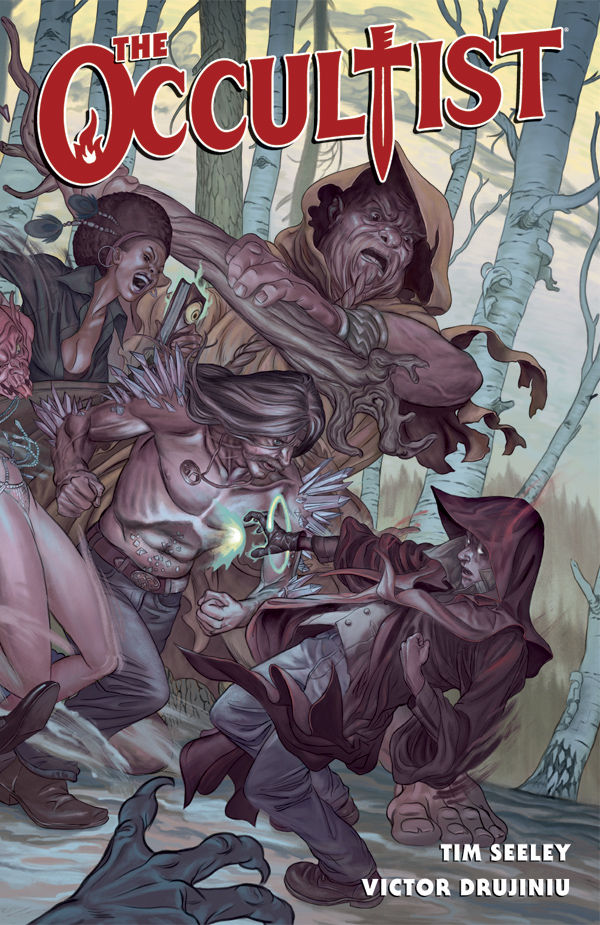 Oh these kids today…didn’t they learn anything from watching The Neverending Story or Charmed? Old books stores equal bad things happening, I guess no one told this too Rob, our hero in The Occultist Volume: One written by Dark Horse publisher Mike Richardson and Tim Seeley (Hack and Slash) and illustrated by Victor Drujiniu. Rob is a college student trying to make ends meet working at a book store when he’s given the gift that keeps on giving in the form of supernatural powers one night while working. He’s quickly met by strange men in suits who wind up killing the owner of the store to get to Rob and his powers. This results in a serious chase, the death of the killers/demons (using Robs powers) and a murdered store owner. This spiritual war places him in the middle of a murder investigation of the owner of the bookstore he worked for. Detective Melendez is the sexy young cop assigned to the case. Believing this to be a pretty straight forward case of murder she soon realizes that she’s way in over her head. Reluctant at first she decides to help the Occultist fight these forces of evil both the ones on his ass and the one’s no one knows about, but exist in our realm.

In a word The Occultist Volume: One is “fun” in that Buffy way. The story is solid in that there’s a hero, a love interest/vigilante sidekick, and there’s a bad guy… really there’s several of them, but only one big one so far. I’m reminded of the anime Vampire Hunter D when reading The Occultist. In VHD the hero’s hand speaks to him, aiding him, in The Occultist it’s his powers/sword which also is his hand (only his hand is glowing green). I do appreciate them not going to generic on the hilarity. There’s room, in the wrong hands, for this to become  too much of a “coming of age” story. The writer does an excellent job of not pressing the Peter Parker button. There’s a nice blend of humor and sexiness and one doesn’t have to look too hard to see who this story is geared to. I like the illustrations, but they do look a little like real photos that have been drawn over. Maybe the illustrator is just that good. This is a perfect title for those just starting to read comics of a different nature. For me, Neil Gaiman’s Sandman series turned my world around as did Vertigo titles in general and that’s how I imagine this title will be for Hero fans looking for just a little bit more…story wise.