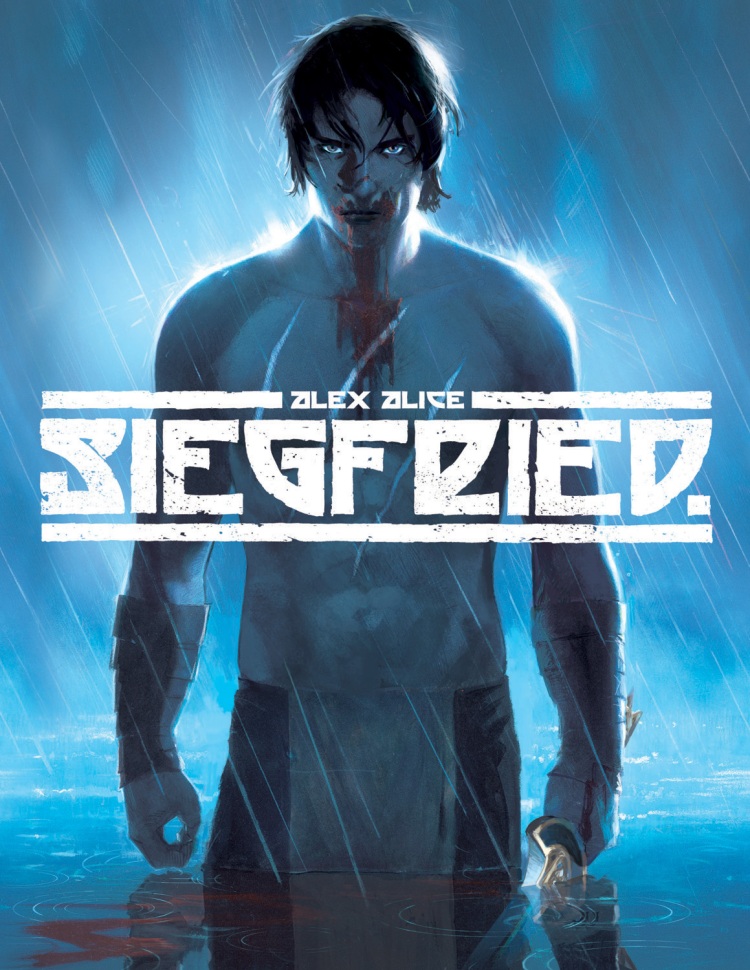 Not often do I get the chance to review a graphic whose origin’s are derived from a classic opera, once thought to be pretty boring by your humble narrator. But after having read SIEGFRIED written and illustrated by Alex Alice I may have to go back and re access. Siegfried is based on The Ring of The Nibelung, an opera written by Richard Wagner. When most of us think of opera’s and when I say most I’m referring to the image pumped by the stupid media, we think of a big lady with blonde ponytail wig, horned helmet, full armor and sword belting her lungs out. What most don’t know is that this overdone and highly stylized image is from an actual opera, part two in fact of Wagner’s “Ring of The Nibelung” called “The Valkyrie”, “Siegfried” is part three. If any of you remember the scene in Apocalypse Now when the helicopters descend on the suspected Viet Cong village, you remember the music playing in that scene. It’s called Flight Of The Valkyrie from the Wagner Ring opera. I’m basically giving you a run down of my opera knowledge and it pretty much ends there… moving on. In 2000 Alex Alice embarked upon a journey to write an epic fantasy novel/animated film.

Taken from an interview with Alex by dear friend and fellow writer Loerent Kloetzer. The full interview is available in the volume.

…one day in a used record store, I saw a boxed set of The Ring, lovely but expensive. I bought something else and left. I regretted it right away. When I got to the corner, I turned around, went back, and bought it. I put it on the turntable that night…

I listened to The Ring in its entirety, libretto in hand. Freed from the images of the filmed opera, I was enchanted anew. Wagner’s visions were inspired, powerful, romantic, fantastical… And in terms of drama, the libretto is very strong. I had found the story that I wanted to tell and put into images.

The book is a storyboard of sorts for his animated feature that’s currently in production. I posted the trailer for the unfinished film awhile back and got really excited about it’s potential. It has all the qualities of the animation I grew up on. Movies like Rock and Rule, Ferngully: The Last Rainforest and Secret Of Nimh. Alex even sites the movie Secret Of Nimh, animated and co written by my favorite artist Don Bluth, as inspiration for the look of his film and book.

LK | And on the animation side? Disney?

AA | Certainly, but especially The Secret of NIMH. For me, it was the first animated film that seemed to point toward something beyond itself. There was real magic in it, people who fought with swords, and the dead. All while remaining completely animal and childlike. Its mixture of story and media aimed at children but treating of more lasting things, things we don’t tell children, is the basis for my Siegfried project. In The Secret of NIMH, the scene where they descend into the rats’ home is visually unparalleled.

Siegfried is fascinating, whimsical and most importantly a simple story or at least Alex did a hell of a job on focusing on what he thought his readers would like. Knowing a little about the opera myself, it must have been hard to sift through the melodrama and find that likable arch. It’s no wonder it’s taken him nearly ten years to complete this project.

LK | You did the first version of the synopsis in January 2002. You finished drawing the first book in 2007. Was it difficult spending five years with the same story, the same characters? How did you keep the subject fresh in your head for such a long time?

AA | I noted down some of the things that really interested me in the story and went back to them a few times. And I’d plunge back into pieces of music, the cinematic moments. But I’m so completely at the heart of what I want to be doing; I had such fun dealing with this subject.

I work in stages: the writing phase is very long and I don’t let myself draw while I’m in it. Then I do the storyboard for the comic in one fell swoop. I had great fun creating images of the things I’d had in my head for so long.

Then I like to refine the same story, pass it through a sieve. Go back, sculpt it. Sometimes you cut off pieces you shouldn’t; it’s one of the risks. That’s why I don’t work on too many subjects at the same time. I want to best serve the subject I’m dealing with.

Screenplay revisions are sometimes a nightmare, but it’s exciting to finalize a new version that says the same thing in a stronger, more concise way, or one more suited to the medium.

This man has talent oozing from his pours and not for nothing it would seem the Asian style of animation seems to be taking hold here in the states. One person one project, but assuming the project is his or her baby I don’t think the artist mind. SIEGFREID is large and delivers in scope keeping with the epic opera. To talk about the illustration seems like a moot point seeing as how it’s possibly some of the best images I have ever seen and to know that Alex is hard at work translation that into a motion picture gives me chills. SEIGFRIED Volume #1 is on sale now at Archaia Entertainment. The visual retelling of this classic story will blow your mind!

Based on the medieval Germanic mythology of the Nibelungenlied, SIEGFRIED tells the story of a child discovered in the woods by a dwarf-goblin who raises the boy in protective secrecy. As he grows older, however, the boy discovers that he is more than just a lost orphan — he has a destiny planned by Odin, the father of the Norse gods, to fight the dragon Fafnir, guardian of the forbidden Rheingold. This beloved tale of high-fantasy and epic heroic discovery is known to have inspired countless well-known classics, including J.R.R. Tolkien‘s Lord of the Rings.