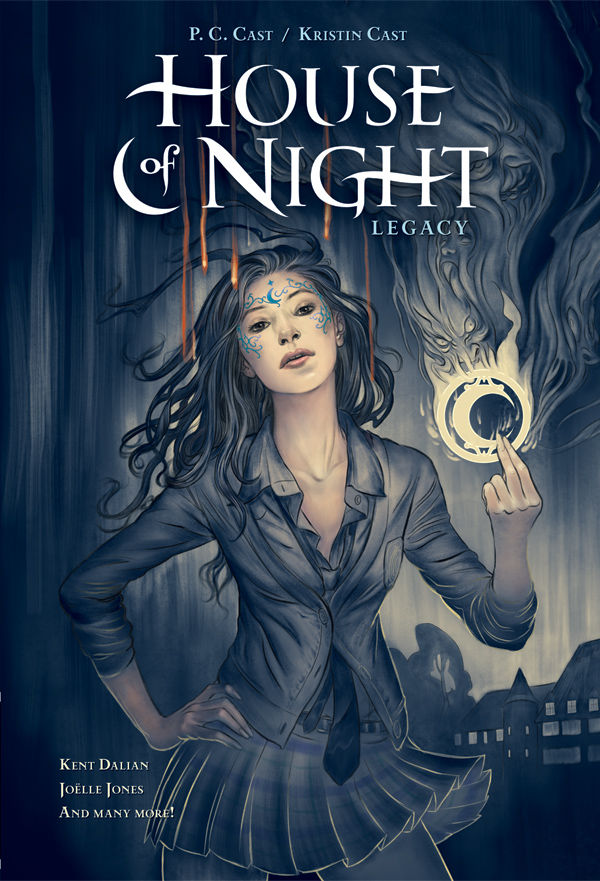 So another vampire story arises from the ashes of a tween novel funeral pyre. Not to be left without a booth at comic con, a graphic was created to accompany it. That being said, what can I say about House Of Night written by mother daughter team P.C. Cast and Kristen Cast, that hasn’t been said about every other teen vampire novel? At least these vamps don’t sparkle? No seriously, I didn’t know what to expect when I began reading House Of Night, maybe if I had I been paying more attention to the ever growing teen fantasy novel section at Barnes and Noble I might have noticed H.O.N’s popularity, but I didn’t and now I have nothing to talk to my teenage, water drinking, desert ordering, non tipping guest about at my serving job…drats! I’m happy to say H.O.N did not annoy, in fact it’s more thought out than most of the mindless lore of late. It succeeds in not making this all about teen angst and blends a level of discipline on the part of it’s young characters, making it not only a cool book to read, but a great morality tale as well. It’s slightly reminiscent of Jedi training as the character’s in H.O.N learn more and more about what’s expected of them as “the change” (when you become a vampire) approaches. The story is deeply rooted in Earth based Druid religion’s and draws heavily from the Earth Goddess who in this series is called Nyx. Female and not male empowerment is the constant in this story as our hero (Cloe Redbird) a fledgling vampire learns how to be the leader of a vampire coven known as The Dark Daughters (A sorority of sorts at their school House Of Night). I’m glad, and this is where I think the graphic comes in handy, that I had images to go along with the story. The art done by Joelle Jones “yay girls!” and Karl Kerschl “booo boys”helps in moving it along despite some of the lulls I experienced while reading. I can’t tell, but it looked like the art got better and better as the story progressed, but that could have just been my taste for the style they used with each issue. In Hindsight the lulls could be looked at as tween speed bumps at which point one may decide real quick whether they want to continue or give up. For me it was easy…continue and I’m glad I did cause it turned out to be a decent read. If you were to ask me if it’s niche I’d say yes, but there’s a bit of soul in this one and that goes a long way for me. Plus reading it reminded me how out of touch I’ve been with my Wiccan friends in Florida. H.O.N is a wonderful addition to the vampire genre “as a graphic” or even a clever anime if the God‘s or Godesses see fit. Another vampire film, I don’t care how good, might make me nauseous.