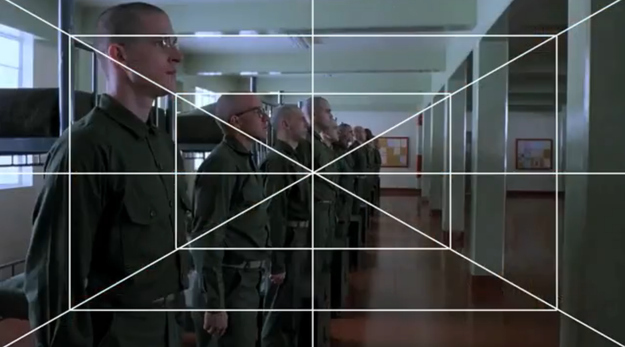 The Stanley Kubrick‘s method of cinematography was something I caught onto early, even before I attended film school. It was pretty clear to me that he relished forced perspective and vanishing points. Some say it was something he picked up from the great filmmaker Kurosawa some say it was all his own. I tend to believe the latter.  Part of me wants to believe also that with such a simple approach to film making it would  be rather easy to shoot one of his features, just force perspective every fucking shot, but as you watch this brilliant montage edited by Kogonada it wasn’t so much shooting the image as it was getting your actors to stay centered and in alignment with his framing for extended periods of dialogue take after take after take. That’s where the magic came in and if your like me you know a little about how often Stanley would do insane amounts of takes of seemingly inconsequential stuff. David Fincher (Seven, Benjamin Button) prides himself in this same method and says he owes it to Stanley Kubrick. There have been actors who have buckled under the pressure and severed their ties with Stanley as soon as the filming was done, due to the rigorous demands on set. We may never know the sweat that truly went into Stanley’s work by everyone involved, but looking at this video you may slowly come to the realization, as I did, that the old phrase “There’s a thin line between genius and insanity” really comes into play.