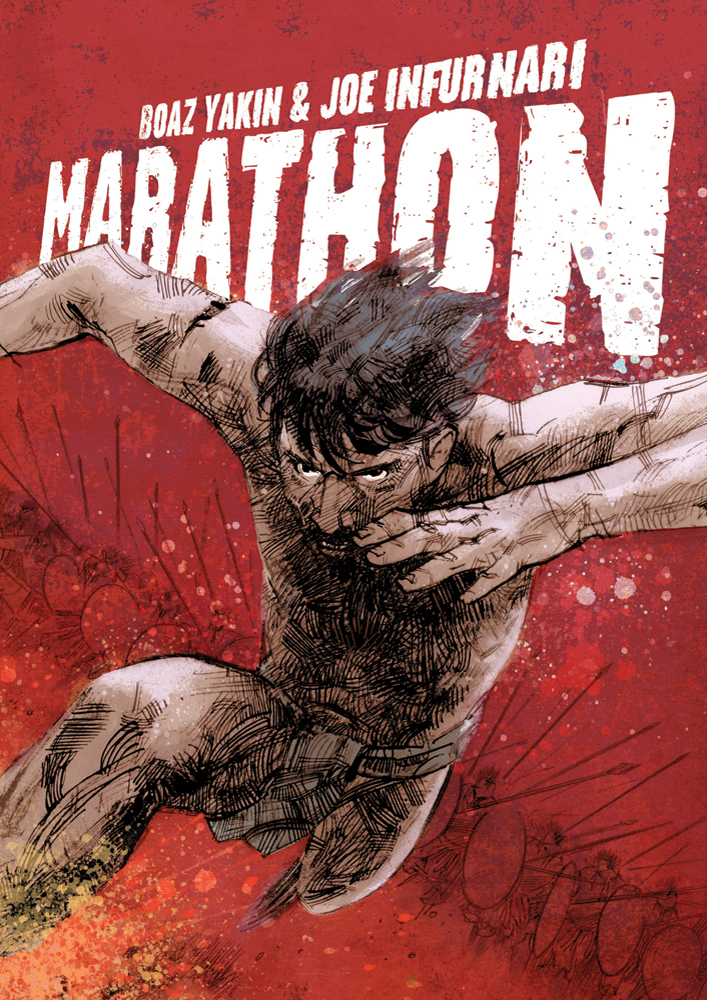 Marathon is the most classical of chase sequences.  A perfect precursor to the Frank Miller film, 300, in both tone and realism, Boaz Yakin and Joe Infurnari’s graphic novel is a page turning account of the 240 kilometer, 2 day run of the soldier, Pheidippides, and the ensuing Battle of Marathon that is considered to be a pivotal moment in the preservation of western civilization and the democratic ideal.  It is this story that inspired Robert Browning to pen the poem which induced the founders of the modern olympic games to form the 42 kilometer race and name it…marathon.

The novel is a race from start to finish with no lapse in action.  This is significant considering the amount of detail that writer, Boaz Yakin, elaborates upon with the actual names and events appropriate to the event.  Marathon is at once two stories of equal relevance.  It is the story of Eucles, taking the part of Pheidippides, using his incredible passion and athletic ability to unreachable heights by running over 300 miles from Athens to Sparta and back again within two days in hope of incurring the aid of a rival city-state to stop a foreign invasion.  Eucles is denied by the Spartans, yet he must quickly return to inform his countrymen of the news.  Aided by the god, Pan, Eucles executes the grueling trip back through bandits and rough terrain, preparing all the while to repel the Persian masses on his arrival.  Beyond these heroics of Eucles, this novel is the story of the beginning of Athens we know today.  The Battle of Marathon is the first attempt of the Persian invasion of Greece.  The first denial of that attempt.   Outnumbered by easily 3 to 1, the Greek hoplite army prevailed with tactics, bronze, self-preservation and honor.  Marathon displays the history of this event with lightning frenzy and educated research, worthy of the libraries of public institutions and graphic fanboys alike.

Joe Infurnari’s inventive scenes of bravery and conflict in tones of brown and graphite pencil-like scratching work wonderfully in this novel.  Imagining the history taking place in glossed color wouldseem unconvincing.  Some of the action is difficult to interpret, leaving the imagination to fill in blanks.  Yet, the overall mood and pace allows said imagination to overcome what slight confusion there may be.  The framing should not go unnoticed, the balance of small-scale intimacy, large-scale battle scenes, and play-by-play are those of a fan of the art.

A bit about the authors:

Boaz Yakin.  Don’t be surprised if you see Marathon being produced into a feature film.  Mr. Yakin is no amatuer, and with the events depicted in the graphic novel happening 10 years prior to the real-time of 300, it would make for a perfect sequel/prequel.  Boaz has won a filmmakers trophy for his film, Fresh in 1994.  He has also written the screenplays for The Punisher, Safe, and Prince of Persia.  His film Now You See Me is currently in post production.  He is also a founder of the production company, Raw Nerve, with Eli Roth and Scott Spiegel, which focuses on horror films.

Joe Infurnari has illustrated the novel, Mush! Sled Dogs with Issues, published through Macmillan and written by Glen Eichler, a writer for the Colbert Report.  Joe has also been nominated for an Eisner award for his web comic, The Process, and has a graphic novel entitled, Time Fucker, to be released soon.  Follow his progress through @Infurnari.

If you’re a history buff, like myself, History.net has a great article on the Battle of Marathon and the mythos involved in the great battle’s circumstances.  If you are more of a visual learner, the History Channel has an episode dedicated to the event on the program, Decisive Battles, utilizing historians and video game technology.  After watching this series, I was even more impressed on the skills of Yakin and Infurnari on relaying this story in the graphic form.

I hope you really dug the shit outta this review.  Check out my other posts and follow me on Twitter @HugoSchoen

A fan, and promoter, of the graphic novel artform. A lover of life and song. A dreamer of incredible and alternate realities. A witness to the dedication of an open mind. View more posts

2 thoughts on “The prequel to the film, 300: Marathon – by Boaz Yakin and Joe Infurnari”