It’s beginning to dawn on me how powerful star power is when it comes to promoting a video game. I 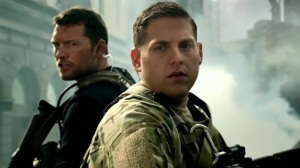 first came to this realization when the star of that amazing remake 21 Jumpstreet (I kid), Jonah Hill and Jake Solee himself Sam Worthington (AVATAR), did that spot for Call Of Duty: Modern Warfare 3. Okay so I don’t know what the actual numbers were for that game opening day, but it goes without saying that having a recognizable face in your add goes a long fucking way. This new CALL OF DUTY: BLACK OPS II spot directed by Guy Ritchie

comes on the cusp of the latest Halo 4 launch trailer produced by David Fincher and directed by cgi partner Tim Miller, another power house ad. Black Ops is filmed in that Ritchi style and pushes the pause button on just about every scene, analyzing it for all it’s cinematic worth then returns to the action only to do it again and again. He even enlisted the help of his main man from Sherlock Holmes, Robert Downey Jr, to play a fighter pilot. The spot was written by David S. Goyer (Batman Begins) and Dave Anthony and features the voices of Sam Worthington and Michael Rooker, with music composed by Trent Reznor and Jack Wall. With all this high profile press there will be plenty of parents throwing their offerings into the mouth of that monster known as Black Friday come November 23rd. Find refuge and sacrifices!! Call Of Duty: Black Ops 2 hits the stands November 13th