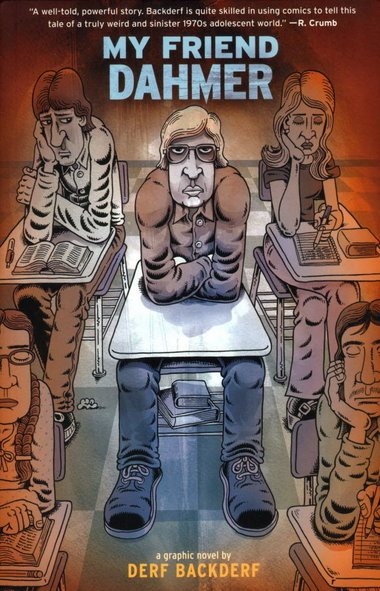 A haunting graphic novel written and drawn by a former classmate and contemporary of the infamous serial killer.  This isn’t a story of the horrific acts that Dahmer committed in his adulthood, rather, it is a foreshadowing of the violence to come.  The reader is a witness to the struggling and confused adolescence of a teen who could possibly have been helped, but, was left to be siphoned through the system largely unnoticed.

As human beings, educators or students, we cannot possibly be expected to determine whether a loosely observed individual is capable of the atrocities that Jeffrey Dahmer committed.  If we were, it would make for a strange and awkward reality where our most intimate thoughts would be subject to public scrutiny and incarceration.  That being said, how does a teen wander through the halls of a high school for four years, consistently inebriated by 8am, and mimicking a victim of epileptic fits on a daily basis not get reached out to in some form or another? Derf Backderf allows us to answer this question in his novel, My Friend Dahmer, by giving the reader the perspective of a true contemporary.  Largely autobiographical, My Friend Dahmer, illustrates an arm’s length friendship between Backderf’s inner circle and Dahmer, whom was dismissed as a freak by the rest of the middle and high school population of  Richfield, OH.  Dahmer is quoted as saying that this period in his life was his most joyful.  After reading the novel, you will be hard pressed to not find a small sample of sympathy for a boy who became a mocked mascot during a progressive path towards darkness and sexual dysfunction.

Written and illustrated over the course of many years, My Friend Dahmer, is Backderf’s resolution to shed light on a topic that most of us find completely relatable in an obscure sense.  The artwork, of which Backderf describes as post-punk, has influences of R. Crumb and Don Martin, however, Backderf’s style is definitely his own.  The blending of comical illustration and realism works quite well as it allows the reader to be detached enough from Dahmer’s post high school atrocities to approach a real feeling for an adolescent who would become the monster he is known as today.

Derf Backderf speaks about his graphic novel at the Akron-Summit County Public Library.

Full-length, Jeffrey Dahmer interview, with Stone Phillips on MSNBC.  A very honest and creepy dialogue between Phillips, the renowned serial killer and his father.  Dahmer wanted complete control over his victims, total mastery over the best looking creature he could find.  In his own words, a sexual “zombie.”

All photos courtesy of Derf Backderf and Abrams Books.

Check out these other sites for more info:

A fan, and promoter, of the graphic novel artform. A lover of life and song. A dreamer of incredible and alternate realities. A witness to the dedication of an open mind. View more posts