Peter Melton & Marcus Dunstan, the writer/director team that brought you the 2009 slasher The Collector, have returned with one of the better slasher films of the year: The Collection.

The stylish, fast-paced sequel sees the return of the masked man and his most recent collectible, Arkin (Josh Stewart).  If you haven’t seen the originating film in the series, The Collector, be sure to get into the theater before the title credits.

Through various news feeds and breaking stories, you’ll get enough information on the backstory 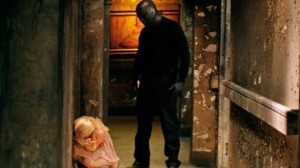 between the Collector and Arkin so as not to be completely lost. Although, truth be told, it’s not very complicated – the Collector always takes one (victim) and Arkin was the last one taken. The Collection, thanks in part to the strength of the performances from its cast, is strong enough to stand on its own.

Make no mistake – guts, gore, and violence are on the menu here. If you have a weak stomach, rethink your plan. There are few real scares to be had here, but what The Collection lacks in horror, it makes up for in blood spilled and body count. Within 15 minutes of the film’s opening, the Collector has already killed several hundred party-goers attending an underground rave.

This time around, it’s difficult to understand how the Collector selects his latest victim, a young deaf woman named Elena (played by Emma Fitzpatrick), from a crowd of hundreds at the aforementioned underground rave. Maybe it’s nothing more than the fact that she survives while, around her, hundreds of others are falling into the Collector’s traps – not special or unique enough to elude him, to prove they are worthy enough to be included in his collection. 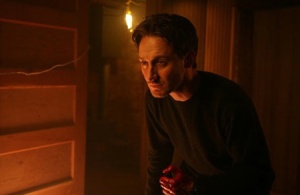 Among the initial wave of victims, a friend whom Elena must watch, helplessly, as she is crushed to death. An emotionally electric moment in a film where you may not expect to feel anything for the characters, especially not so soon. Credit this to Fitzpatrick whose performance is strong, believable, and exciting.

Arkin, who is inadvertently freed by Elena, abandons her the first chance he gets, using another man’s body as a shield to break through a window. Broken, on the verge of death, Arkin has barely recovered as he lays handcuffed to a hospital bed when he is approached by a man named Lucello (Lee Tergeson). Lucello has looked after Elena since she was a girl. His employer, Elena’s shadily-powerful father (Christopher McDonald), has charged Lucello with finding his daughter. For that, Lucello needs the only person known to have survived an encounter with the Collector. For that, he needs Arkin.

Against his will, his better judgment, and every aching and broken bone in his body, Arkin leads Lucello’s team to where he believes the Collector is – an abandoned building (Hotel Argento – a nod to our dear Dario?) where “even the rats won’t go to sh*t”. Inside the hotel is a macabre carnival of living zombies, ravenous dogs, used and bloodied syringes, mutilated bodies, severed limbs, and booby traps. Oh, and that’s just the first floor.

Consequentially, booby traps and contraptions play a less significant role this time around, but they still help to drive the action and build audience tension. Action sequences are also tighter, clearer.

The film’s large body count has to be mentioned if for no other reason than it is so monumental, so large that to ignore it is nearly impossible. I can’t not say something about it. At first I sat in the theater smirking a bit at all the bodies. Grim, I know, but it is just a film, and a slasher at that. You expect a certain amount of carnage. But the house of horrors that is Hotel Argento is positively bursting at the seams with corpses. You’ll get your fill, you have my word.

Without giving anything away, The Collection has an ending fit for a follow-up, one that I will eagerly await as long as Dunstan/Melton return.