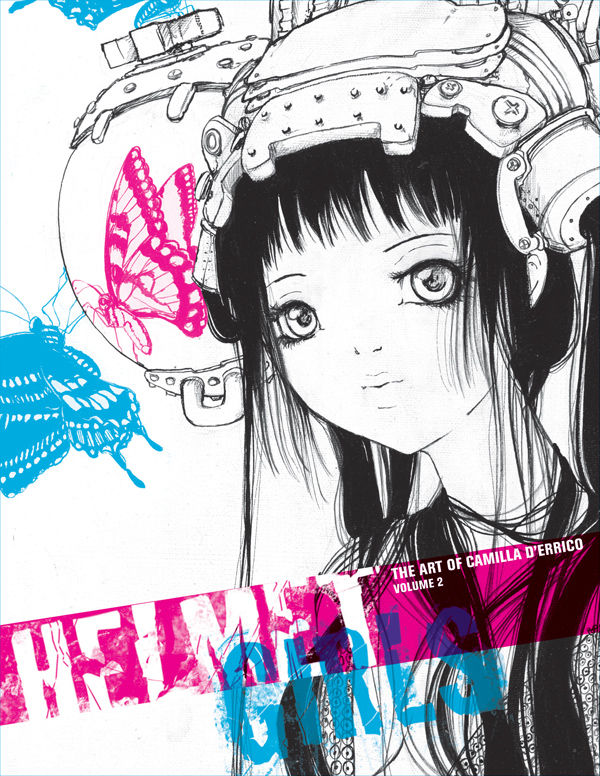 I guess, the only next step to drawing manga chicks is putting crazy head gear on them, and boy, do they seem to love it. No matter how crazy the helmet is, illustrator Camilla d’Errico makes it work, and that’s quite a feat considering how clunky and uncomfortable these things look. There’s no rhyme or reason for the head gear, or is there? Do some of these apparatus harness psychic energy, or do they aid in giving these waif models the strength of twenty men at the mere thought? You could speculate all day while looking at these whimsical toons, but according to the forward in Camilla’s book, the answer to the girls’ origins eludes even her.

Over the years I’ve tried to define their origins, to put into words what I see in my head, but it’s like describing ice to a butterfly. So I’ve decided that if I can’t define them, then they are meant to be an enigma.

To me each of these girls is distinct, existing in a world caught between a physical reality and an ether, between the machines of the past and those of the future. The helmets are extensions of these girls that communicate their power and ability to seduce through solid metal.

Seduce? Metal? I see where this is going. It’s no mystery Camilla has an amazing grasp of the female form, so to contrast that beauty with the hardness of the helmet (a possible Freudian slip), it’s easy to see why this could be a lesson on empowerment, in particular, female empowerment. The helmets, being huge and clunky, and mind you this is all my opinion, act as a metaphor for the coming of age. Are you still with me? The helmet represents, in a way, the awkwardness of adolescents. Sure they look cute on them, but it’s something they must wear whether they like it or not. Sex, drugs, friendship and love read as the gears and knobs on the helmet. They just keep getting added on, and they don’t seem to be stopping, but somehow they wear it with grace and elegance, evidenced by the line work and wispiness of the girls’ features, from the head down to the toes. Of course, I could be way off, and the illustrator herself said that she wasn’t sure where her inspiration truly derived from.

For the million ideas that I have pitched into the hat as to why she draws these images, it’s always the million and one, that I haven’t even begun to see, but I’m okay with that. Some things are best left unsaid…thus endeth the lesson.

Checkout these and other works by Camilla d’Errico here.