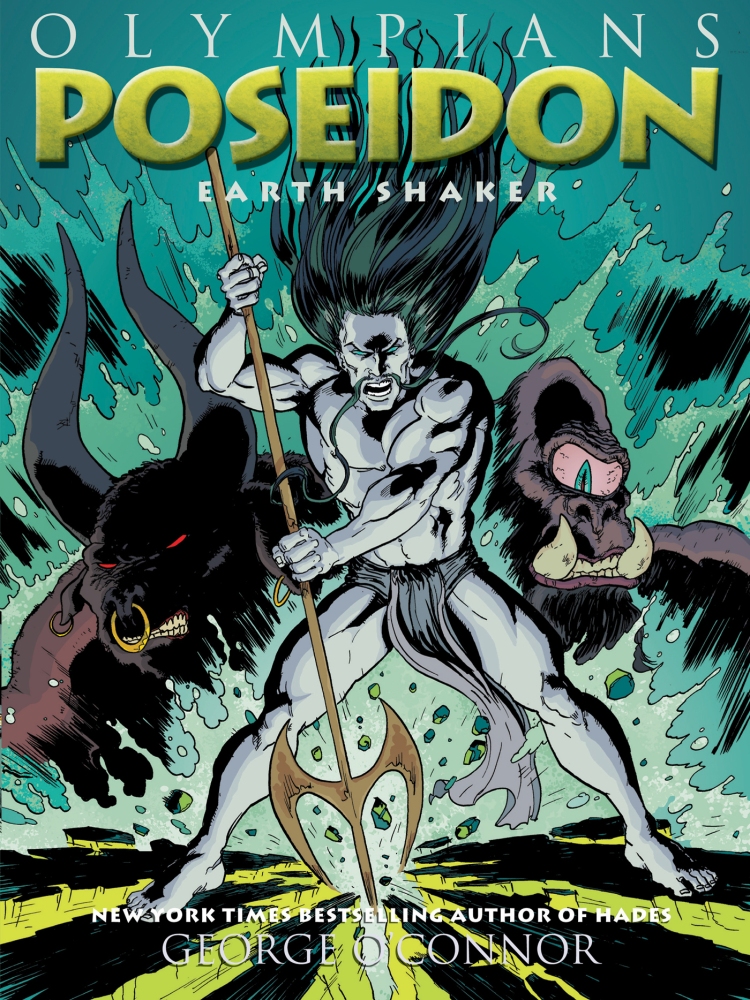 Gods can be complicated. I know…I’ve had a love/hate relationship with one going on 39 years now and I seem to be only scratching the surface of who it is. Unfortunately, no one has done with the Bible what illustrator/writer George O’ Conner has done and made a graphic novel about Greek Gods and how they made sport of us human’s thousands of years ago, but maybe someone will read this review and smarten up. Poseidon, if I’m right, appears to be book five of George’s “Olympian’s” series, distributed by the good folks at First Second publishing. His other books in this series are Zeus,Athena,Hera,Hades and Aphrodite. The series is an attempt to humanize these often times misunderstood creatures.

You know, as well as I, that much of what we know about all these wonderful Gods is nutshelled into the act or acts that they have become best known for, but what about who and why they are and most importantly what makes them do what they do? Most who follow deities are slaves to these questions even today, so with that I must tip my hat to George at least for trying to remove a bit of the luster from these stories and giving us a bit more, even if it’s still all make believe.

The book traces Poseidon’s lineage all the way back to when he was a horse that almost got swallowed by Kronos. It talks about his mutated sons, his fight with brother Zeus and his contest with the other Gods to have a city in his name. The book paints him out to be the proverbial black sheep of the family. So much power, but very little respect. George does a wonderful job of given us some back story of all the Gods with a detailed family tree and in the back of the book more information regarding the God, kinda like a Pokemon card.

Now…for what I gathered from the book…

Indeed….complicated. Not so much in the way George explains things, but just in the story alone. After all, this is how it all went down. My knowledge of Greek Myth is limited and goes as far back as the original Clash of the Titan’s, the Sir Laurence Olivier one, so when you start throwing all this bestiality and war at me, I tend to shut down. But there was something appealing about Poseidon and his lone God complex. That same something that may have appealed to some young musician or artist in that time, more so than Dionysus. Judging by Poseidon’s plight, he is the personification of youthful rebellion and one whom I might’ve called upon for guidance if I wanted my concerts to rock the Parthenon.

As the author has said, it makes so much sense that Poseidon would be made ruler over something that, to this day, is still widely misunderstood, but oh so alluring. The God of the sea has been the brunt of many jokes lately. His image has been used for marketing and is quite possibly the most recognizable God in Greek myth, but what do we truly know about him? Even Auqaman has felt the effects of the worlds lack of respect for the sea and yet the sea continues to devastate and rise and will one day take over completely and yet we go on trying our best to control the uncontrollable. Yes the Greeks were smart for making this caretaker of our oceans this brooding, angst ridden guardian whom, to this day, fights for ultimate significance and George does a damn good job of bringing his misunderstood story to light.