Emily begins experiencing parasomnia and a slew of other Ablixa-related side effects.  Banks fails to see and react to these potentially dangerous signs and, one evening, Emily kills her husband in a parasomniac episode. 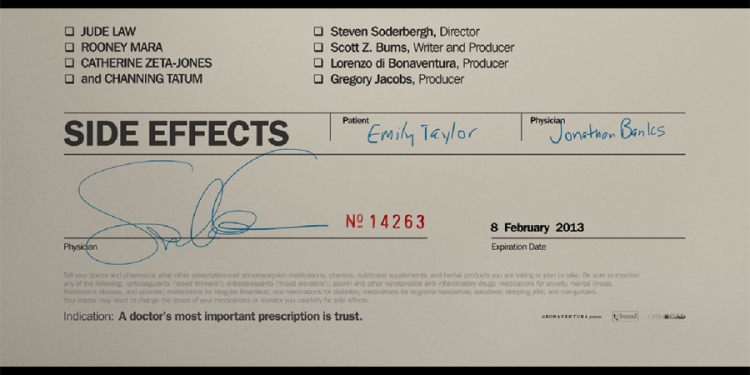 At first blush, Side Effects wants its audience to blame pharma-psychology, the act of medicating, rather than learning to cope, with what ails us.  Even the beginning of the film projects a sort of haze-inducing numbness, both about the environment in which we find Emily and her overall well being.

Measured camerawork and longer than normal shots lend themselves to Side Effects overall sense of being trapped in a fog, where time is meaningless, and from which the entire cast of characters must struggle to free themselves.

But, this barely begins to scrape the surface of Side Effects and what Soderbergh hopes to achieve.   Part drama, part psychological thriller, Side Effects wants to keep its audience guessing, but is it seductive enough to keep you interested?

Performances by Rooney Mara (The Girl with the Dragon Tattoo) and Jude Law are fleshy and mesmerizing.  It’s difficult to take your eyes of Mara and the fragility she imparts in Emily, especially during the first half of the film, when the story leads her down a very dark, vacuum-tight path from which she sees no escape.

Stylish, provocative, and ultimately satisfying Side Effects is penned by Scott Z. Burns (Contagion) and features a dreamy, if not noticeable, score by the prolific Thomas Newman.

I won’t reveal any spoilers here, and I probably won’t need to.  Side Effects is not entirely unpredictable in execution, but is well worth the price of admission, if only for the scenes between Mara and Zeta-Jones.  Well paced with a healthy rhythm to its storytelling, Side Effects will illicit different responses from everyone, but it’s hard to imagine boredom among them.

Check out the Trailer:

One thought on “Soderbergh Supplies Sleepy Side Effects”