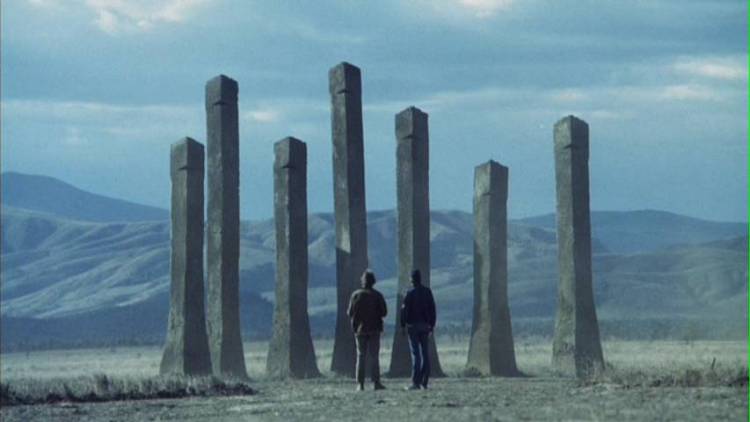 The film that led the way for movies like Beyond The Black Rainbow, has just been given new life with the recent discovery of a new ending. Phase IV starring Nigel Davenport, Michael Murphy and Lynn Frederick and directed by Saul Bass was a monumental feat in film making for the time. Phase IV used elements from directors like Alejandro Jordorowsky, George Lucas and Alfred Hitchcock to create a very unsettling look at an alien invasion, but from a species all too common to humankind…the ant.

The Paramount produced film was dissed by most movie critics and was quickly placed in the eco-horror jar and pretty much ended director/graphic designer Saul Bass’s creator before it got started. Flash forward thirty nine years and Phase IV has become a cult favorite due in part to shows like Mystery Science Theater 3000, that although made fun of the film, breathed new life into it in a strange sorta way urging those not satisfied with it’s bastardizing to pursue this gem.

Due to some unknown cosmic event, listed in “phases”, ants have undergone rapid evolution and developed a hive mind. A scientific team begins investigating strange towers and geometrically perfect designs that ants have started building in the desert. The local human population flees the strangely acting ants. James Lesko (Murphy) and Ernest Hubbs (Davenport) set up a computerized lab in a sealed dome located in an area of significant ant activity in Arizona. The ant colony and the scientific team, along with a holdout rural family, make war against each other, with the ants being the more effective aggressors. The narrative uses the scientific team as the main protagonists, but there are also ant protagonists going about their duties in the colony. The ants immunize themselves to the humans’ chemical weapons and soon infiltrate their lab. Teams of ants penetrate the computers of the lab and short them out. Kendra Eldrige, a young woman who had taken refuge with the scientists, abandons the lab.

Hubbs and Lesko begin to have different plans for dealing with the ants. While Lesko thinks he can communicate with the ants using messages written in mathematics, Hubbs plans to wipe out a hill he believes to be the ants’ central hive. Delirious from an ant bite, Hubbs can barely get his boots on, but is determined to attack the hive and kill the ant queen. Instead, Hubbs literally falls into trap – a deep ditch that soon fills with ants that consume him. Helpless to save Hubbs, and concluding that the ants will soon move into desert areas where their growth will exceed man’s ability to control them, Lesko chooses to follow Hubb’s plan. He sets out to the hive with a canister of poison. Descending into the hive, Lesko hunts for the queen but instead finds Kendra. In the film’s cryptic finale, the two embrace. Lesko realizes that far from destroying the human race, the ants’ plan is to change them, making them a part of the ants’ world.

The Cinefamily of Los Angeles has come across the original ending that was intended for the original cut of Phase IV and will be showing from April 26-28 @ 9:30pm pacific time.

Description of ending is as follows:

“Starting with the same shots as in the theatrical version, Michael Murphy’s character James descends into the ants’ hive expecting to blow it up, ending the war with humankind’s insect adversaries. Instead, he enters a room where Kendra (Lynne Fredrick), the girl he and his partner rescued from insecticide poisoning earlier in the film, is lying in a pool of sand. She rises and approaches him, as he realizes that the ants want to join – or merge – with humanity, prompting a new evolutionary development in both species. James and Kendra find themselves running through a gauntlet of geometric structures, eventually ending up in a maze where they are tested and observed in the same way that mankind tested the insects.

In a dizzying and often disturbing montage of imagery, James and Kendra become an embodiment of all mankind as a new species is created. Emerging from their transformation, the pair gazes out onto a sunset-stained landscape, realizing that humanity has reached a new level in its evolution: “Phase IV.””

This film is filled with iconic images, images that have been stolen by those smart enough to do it. Especially in this age of rehash and throwback. A film like this is an American treasure and deserves to be right there among such classic science fiction films  as Planet of the Apes or 2001: A Space Odyssey.