Picking up where The Avengers left off, Iron Man 3 finds Tony Stark in the clutches of post-traumatic stress from which he is often physically, emotionally debilitated.  Pepper Potts has moved into Tony’s Malibu mansion and it’s clear Tony is struggling in the aftermath of the events that took place in New York.  But, when a new threat arises in the shape of The Mandarin, everything Tony holds dear will be put in the balance.  Will he be up to the Mandarin’s challenge or is this the end for Iron Man?

After the first two installments of the Iron Man franchise, it’s clear that everyone attached is going to bring a high caliber energy and polish to future projects.  So, when the Iron Man 3 begins to roll, everyone in the audience has a set of standards and expectations.

After Iron Man was released, I saw it several times in the theater.  I was so intoxicated by the origin story and just completely blown away by the look and spectacle of it.

This was a super hero film unlike any other up to that time.  The protagonist was a real man, flawed by his arrogance, laziness, and privilege.  Forced to fight for his life, Stark faces some serious demons and comes out the other side of it a changed man.

As Tony struggles with PTSD in Iron Man 3, there is a sense of returning to some of the original themes of internal struggle and the examination of personal responsibility. 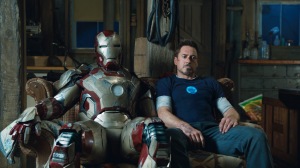 I doubt anyone will argue that Robert Downey Jr. hasn’t come a million miles from his Less Than Zero days.  But, as Tony Stark it’s clear that Downey Jr. has found a home.  Everything the man does exudes a sort of eccentricity and softness that is well-suited to the man behind the iron mask.

With the introduction of Killian (Pearce) and the Mandarin (Kingsley), the terrorism vein of the Iron Man milieu is renewed or solidified.  My gripe here is that Guy Pearce, whose overacting has marred several of his more recent projects including Prometheus, Lockout, and The King’s Speech, is immediately recognizable.  There are actors that disappear into their roles and completely embody the character they’re playing.  Then, there’s Guy Pearce.  He doesn’t really shine until the last ten minutes of the film when he’s getting a beat down.  Until then, if you’re like me, you’ll just have to grit your teeth and bare it when he’s onscreen.

Ben Kingsley, on the other hand, proves again that he is a consummate performer.  As the Mandarin, he is simultaneously terrifying and hilarious.  As the plot’s central threat, you’d think he’d have more screen time but his absence is equally as important in an effort to create fear and dread, the imminent sense of danger from which Tony Stark cannot escape.

It’s true that Iron Man 3 meanders a bit, but I don’t think fans of the franchise are going to mind being in a theater with Stark, Pepper Pots, and the rest of their favorite characters for 130 minutes.  I didn’t, and I have a low tolerance for films that run long without good cause.  There are, in my opinion, several scenes that could have been excised with little to no need to rework the remainder of the film for clarity or continuity’s sake.  I digress.  Consider it getting your money’s worth – after all, it’s not as if you’re going to be bored.  Iron Man 3 is jam packed with the Marvel-requisite amount of action.

The real surprise of Iron Man 3 is Pepper Pots.  What the filmmakers have done this time around in developing her role really gives the film, and the franchise as a result, a place to go. 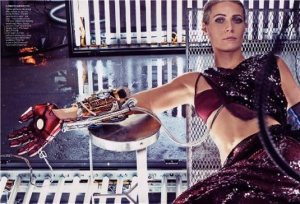 Without running the risk of giving away too many spoilers, it’s true that Pepper’s role is to save Tony – metaphorically and literally.  For the first time, you will get to see a woman wear the suit of Iron Man – repeatedly – and it’s freaking awesome.

As Pepper, Gwyneth Paltrow (this year’s ‘most beautiful‘) turns in a performance that is brutally strong and fiercely willed without sacrificing her femininity.  The filmmaker’s have helped create a character that is intelligent, beautiful, resourceful, and willing to fight for what she loves.  I think it’s true that Pots emerges as the true heroine of Iron Man 3, which is a delight.

Iron Man 3 feels like an ending, despite the words “Tony Stark will return” being displayed in grand James Bond fashion at the very end of the title credits.  Be sure to stick around for it, and for the short scene between Stark and Bruce Banner that will roll after the credits.

Check out the Iron Man mash-up by Mike Relm 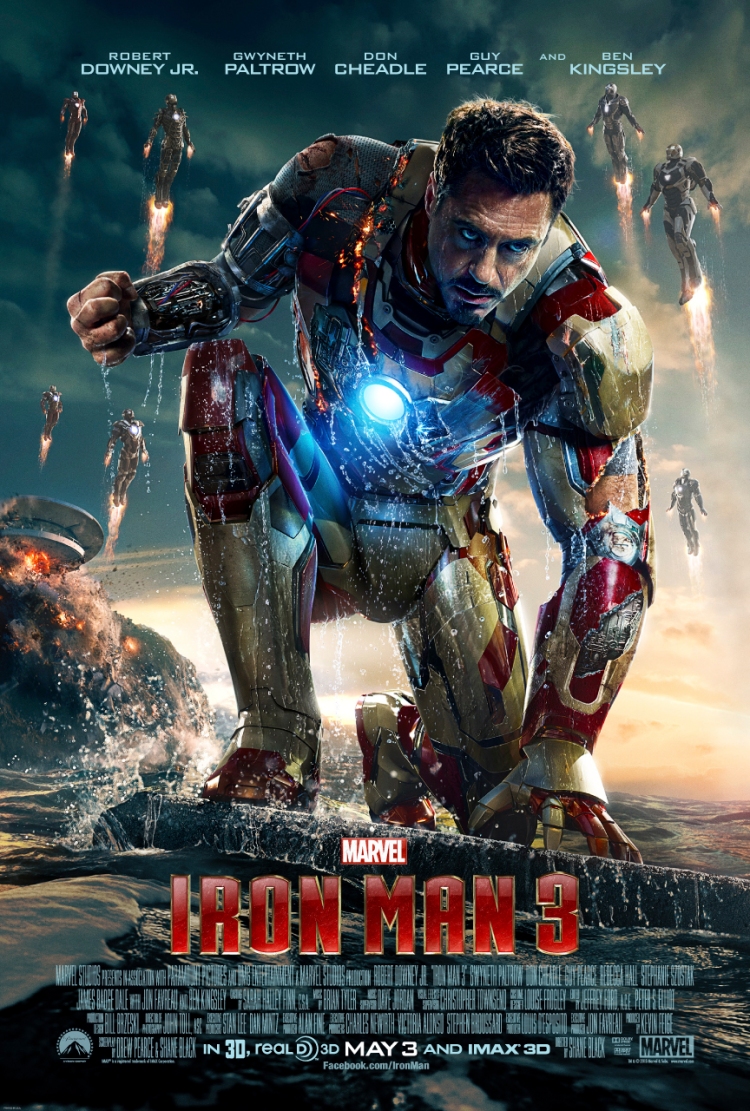