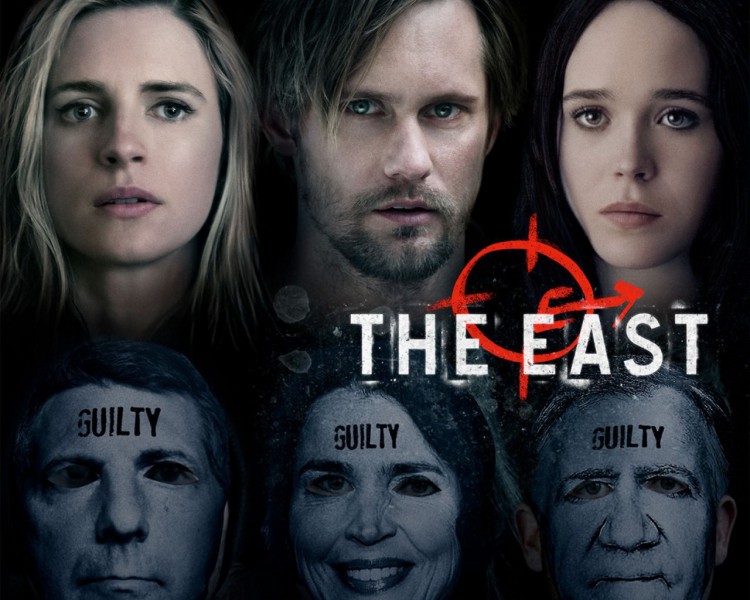 The East is the kind of film that immediately grabs you.  From the outset, you know you’re going to be spared nothing and, as the film begins to roll, so too do the images of the 2010 Gulf oil spill overlaid with the voice of Ellen Page as she recites the manifesto of The East. 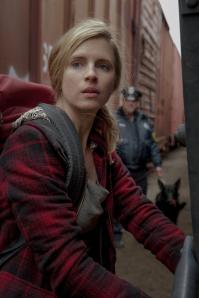 Helmed by Zal Batmanglij (Sound of My Voice), The East weaves a complicated and thoroughly entertaining tale that is two parts espionage thriller and one part humanist drama.  Brit Marling stars as Sarah Moss, a private sector agent working for Hiller Brood; a large, mostly unknown, intelligence firm hired by even larger corporations to keep them in the know.  Freshly recruited, Moss is naive and hungry, what her boss, Sharon (Patricia Clarkson) explains to be a lethal combination.  Moss is sent into the field, in deep cover, with the intent of infiltrating the anarchist collective known only as “the East”.

What’s brilliant about the way Batmanglij and co-writer Marling kick off The Eastlay in its simplicity, its intimacy.  Without seeing any of the group’s anarchist deeds, only hearing the threat from the opening sequence – a threat that is disembodied, faceless and nameless – we have no emotional ties to them.  We feel only the threat.  We watch a fresh faced Moss, awake before her alarm goes off, eager on the morning she is to learn whether she will be selected for the undercover assignment.  We see her nervously choosing an outfit and then waiting outside her boss’ office to hear the news.

Within moments, all of our emotions are chucked in behind Moss.  We’re completely invested.  She is our entry point into the story about to unfold and we’re ready to follow her.  I’m happy to say that, in Marling, we have an apt and talented guide.

Marling, whose performances in Sound of My Voice and Another Earth are noteworthy, is obviously at home in the role of Moss.  After spending two months living a freegan lifestyle, during 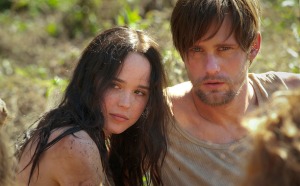 which nothing was bought and the writer/actress learned how to hop trains, sleep on roofs, and commonly ate out of dumpsters, Marling’s transition from the buttoned up intelligence  professional to environmental activist is nuanced, powerful.  As her character is pulled further into the group and its activities, it’s fascinating to watch Moss begin to question her own morality as her perception of right and wrong blurs.

As the group’s charismatic leader, Benji, Alexander Skarsgård is as far away from his True Blood roots as is possible.  And while he presents a man who is sensitive, humble, and fractured, Skarsgård’s performance is solid but unsurprising. 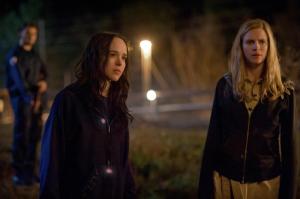 The East also stars Ellen Page as Izzy, the daughter of a large corporation head who has done nothing to stop his company from poisoning water supplies with their waste.  As Izzy, Page finds herself in familiar waters – she’s once more on the outside, but gone are the sardonic comments and biting wit for which the actress’ has perhaps become known.  Page turns in an understated, almost quiet performance as a woman struggling with a deep sense of disappointment that turns to unfettered rage.

The East is a thought provoking adventure that doesn’t shy away from throwing uncomfortable imagery at its audience.  As a key tenet of the group’s beliefs, upon finding a downed deer in the woods, Moss is encouraged to field dress the animal so it won’t go to waste; a process that includes removing its internal organs through an abdominal incision.  To pass the time, group members play truth or dare in order to shed the artifice that keeps them from being truly connected to one another.  During these sessions, there is an “anything goes” vibe that is simultaneously exciting and vaguely dangerous.  These themes are explored and revisited upon the cast, pushing the audience to a place where they, too, are invited to question.

The film’s depiction of actual corporate corruption is done without being overly melodramatic but that’s not to say it doesn’t lack some serious venom.  Some will find

difficulty with the film, feeling as though its script is doling out some kind of heavy-handed ideology.  To those people, I will eagerly say The East isn’t just about corporate misdeeds and the wrongs of the 1%.  The film’s story is built around the moral dilemma that results when we know but do not act.  The East wants to know – can people really change if their perceptions are challenged, if they are taught to question?

Any way you come at the film and its subject matter, The East is a satisfying spy thriller that will feed your mind.