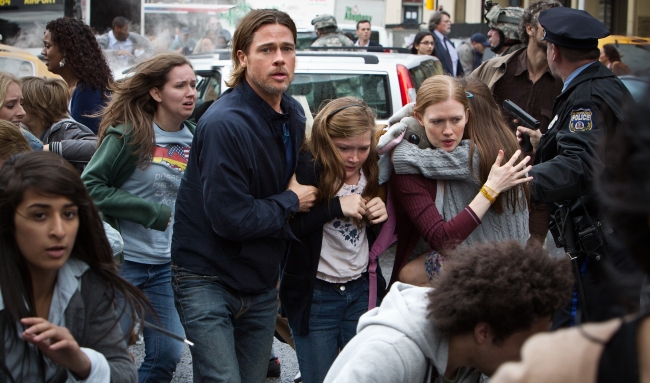 I read about the hiccups Hollywood was having bringing one of my favorite books to the big screen, so I had my reservations about it’s end result. I think some of my concerns subsided after the films premier in New Jersey, where many of the celebrities in attendance gave the film some amazing reviews.

That evening, Facebook and Twitter were aglow with praise for the films intensity and power and how we needn’t worry about all the rumors and that the film is an utter success. That was really all I needed to hear, cause let’s be honest, I was going to see this film no matter what the critics said just cause I am a Max Brooks/zombie fan.

It’s been about an hour since I left the theater with my wife, whom I took to see WWZ for her birthday and my head is still reeling in the films scope and epicness.

The film starts out innocent enough with director Marc Forster (Quantum of Solace, Finding Neverland) establishing, right away, Brad’s character Gerry, as a UN investigator turned mundane husband and father and nothing does that like a breakfast table scene and making our hero cook pancakes. Had I known that that would be the last time we saw any semblance of normalcy throughout the film, I might’ve savored that moment a bit more cause the rest of the picture goes ape shit, real quick.

I should say this before I continue…I too am a big fan of the Max Brooks novel, but I must regretfully admit, after having seen WWZ, that I don’t believe Max’s story could’ve been properly interpreted like it is in the book, as with most films, without confusing the shit out of people or boring them to death, seeing as how the enemy no longer exist when we begin the Max Brooks novel. The book reads like a journal, but it covers many lives and it would’ve been tough to find an arch in all that mess. This first film lays down a nice foundation for a follow up film and “that” I believe, should be more of a Max Brooks based film. They could even take Brad out of the equation completely and start the story off like the book, with the reporter traveling around the world documenting peoples account of the zombie war, but I digress and anyway, Brad’s signed on for the films sequel, so this is a moot point, but I had to make it.

Back to the film.

Brad’s immediately called upon by what’s left of our government to essentially find patient zero, which if you watch the film, there would’ve been no way he could’ve done that. The film would’ve lost it’s credibility instantly if they were able to sift through millions, while fighting for their lives, and found a host and seeing as how there were five writers involved at different times on WWZ, I don’t think I’m alone in this assessment.

Writers Matthew Michael Carnahan, Drew Goddard, Damon Lindelof, Matthew Michael Carnahan and J. Michael Straczynski do an excellent job of narrowing down the scope of the novel. I’ve always believed that if you give the audience someone to believe in they will follow him or her to the ends of the Earth. Brad is made into a realistic hero, realistic by zombie apocalypse standards mind you, but real nonetheless. By the way, this makes me really want to search the web for the original script because there was a lot to work with.

But in the end, I left the theater with no real questions about plot holes or credibility…the film just is. Marc Forster has a skill, I never noticed in his previous films, of building scenes to points of insanity and that was never more evident than in World War Z. Together with the clever use of Marco Beltrami‘s (3:10 to Yuma, The Hurt Locker) soundtrack, Marc Forster stamped this film with a certain eerie global connectivity (does that make sense?) Coincidentally enough composer Marco had also just completed the soundtrack on the film Warm Bodies, another zombie film I thoroughly enjoyed.

Don’t make the mistake of thinking your about to see another zombie flick, filled with gratuitous headshots and the eating of flesh either. WWZ isn’t any of those things, the suspense and action and believe me there is an enormous amount of it, is done mostly through clever editing, sound and music. A technique that could stand to be used more in this age of access. There were many scenes when I expected the camera to show us blood and destruction, but it never does and yet I was surprisingly still scared shitless. Hmmm…you mean less is more? GASP!!!

It’s funny cause there was this really young child seated behind us in the theater with her parents and I said to myself, who the hell brings a kid to see a film like this?
Not realizing that I really hadn’t seen any violence, it’s just been clever editing, sound and music. Tou che Marc Forster…Tou che.

For all of WWZ’s production problems, I’ve seen films get scraped for less. Maybe I’m getting a little sentimental, but I sensed a level of love and determination by all who were involved to make something amazing out of this film and they did it. You really couldn’t ask much more of any of the character’s than what was given. All you could hope for was in the end was that “you cared about the characters”, even if it was just a little. A seemingly simple feat that most care nothing about when it comes to dollars.

So did I like it? Yes, I really enjoyed it and I didn’t have to dumb myself down to watch it. World War Z is a hands down, suspense filled, action packed, white knuckled thrill ride that will sit well amongst the other zombie classics of our time.