According to Hollywood Reporter the Cannes Film Festival documentary that chronicles the ill fated Jodorowsky film, has just just acquired N. American distribution of the Frank Pavich film. Sony Classics will be distributing this amazing film in the U.S.

“To have my first film distributed by Sony Pictures Classics is a dream come true. I’m incredibly excited to 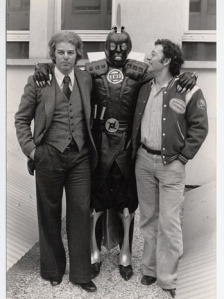 know that we will be working alongside the company that so fully supported such great documentaries like Crumb and Searching for Sugar Man,” said Pavich in a statement. “SPC has seen that, even though this is a documentary about a never-completed film, it is not a story about failure. It’s a story about ambition and how the power of art can effectively change the world.”

In a festival review, The Hollywood Reporter‘s Stephen Dalton described Jodorowsky’s Dune a “homage” to a lost film. “For all its claims of prophetic genius, Pavich’s documentary may well prove to be a more enjoyable film than the high-camp carnival of excess it seeks to commemorate,” he wrote.

In addition to Pavich, Jodorosky’s Dune is produced Stephen Scarlata and Travis Stevens. Donald Rosenfeld is the executive producer.

No word yet on a Blu-Ray DVD release, but we will determinately let you know.