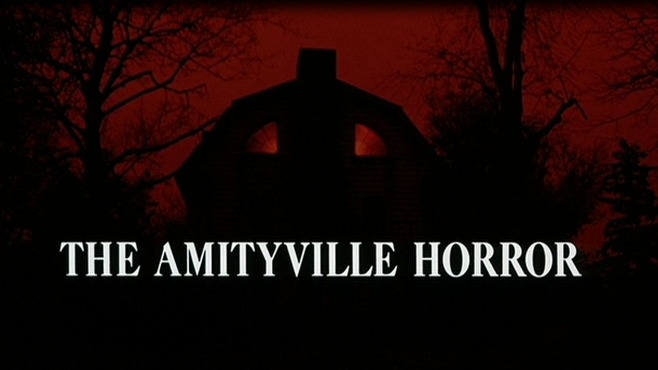 “I just wish that … all those people hadn’t died here.  I mean … ugh!  A guy kills his whole family.  Doesn’t that bother you?”

“Well, sure, but … houses don’t have memories.”

The Amityville Horror (1979) caused quite a stir at the box office in the US the year it was released.  People flocked to see the film adaptation of an apparently true story of a supernatural event that rocked a family to their very core by a house full of demons.

The film tells the story of George (James Brolin) and Kathy Lutz (Margot Kidder), recently married and deeply in love, who decide to shell out $80,000 for a house on Long Island for their instant family of 5 (Kathy has three children from a previous marriage).  The house in question was the site of a grisly mass murder years before, 112 Ocean Avenue.  Regardless of the house’s disturbing history, the Lutz family decide to buy it.

After the sale is final, the Lutz family spends the next several weeks attempting to move in.  Only, the house doesn’t really want them there.  Disembodied voices tell them to “get out!” and seemingly unexplainable events begin to occur at every turn.  A chair rocks itself.  Windows slam closed with no apparent cause.  The house never feels warm to George, who falls ill.  Doors close on their own volition and cannot be opened despite the fact they have no locks.

Kathy, who is a devout Catholic, begs her friend, a priest named Father Delaney (Rod Steiger) to bless the house, to help her rid it of its bad vibes.  Even the girlfriend of George’s business partner, Carolyn (the ever dishy Helen Shaver), feels the bad energy rolling off the house.  Though Carolyn initially refuses to go near the place, she eventually leads George to the discovery of the point of origin in the house.  An area in the basement where the spirits/demons come and go.  Come on.  We all know you don’t go in the basement!  That’s where the bad sh*t always goes down.  Always.

Things continue to escalate and degrade until one night, during a horrible storm, the Lutz family flees for their lives, never to return or reclaim their possessions.

“The truth never stands in the way of a good story.”

The crux of The Amityville Horror lies in whether you are a believer.  A believer in God, in Christ, and therefore in the Devil, in spirits and demons.  As a child, my parents hauled me to Sunday school, religiously (pun intended).  I first saw the film in the 80s when it, no doubt, showed up on one of the local television networks, probably completely edited down and devoid of the bleeding walls that I went “nice!” to this viewing. 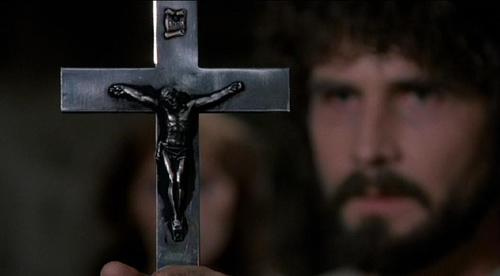 But, 80s version of me, the child version, that is, the one that had been going to Sunday school and learning about good and evil, was terrified of that empty, rocking chair in Amy’s (Natasha Ryan) bedroom.  The 80s me was terrified at the idea of voices coming from no particular person, dispossessed.  Indeed, the 80s version of me was pretty friggin’ terrified of The Amityville Horror in total.

I think it’s true what they say, about not being able to go home again.  Additionally, I think that sentiment, that belief can really be applied to more than just the ideology of “home”.  In fact, it can certainly be applied to films that terrified us, films that we loved, or films that were just so amazing or original or fascinating to younger versions of ourselves.  Films with which, upon revisiting, we occasionally find ourselves disappointed, maybe even a little sad.  Of course, there are many factors at play here, including the fact that we are viewing the film through a new lens, one that has more experience.

Whatever the cause, The Amityville Horror definitely falls into this category for me.  Instead of fear, I found myself preoccupied with the religious angle of the film, of the role it plays in the fear and experiences of the Lutz family.  Instead of being terrified of the little rocking chair, I kept thinking how dishy Margot Kidder (and James Brolin, for that matter, damn!) was in 1979.

No.  The shine is definitely off the horror here, and not just because I’m older and don’t put as much stock in religiously slanted horror films anymore.  Like some of you I imagine, I found myself doubting the validity of any movie with the words (or some combination of the words) “based on a true story” associated with them.  I think it started with Fargo and it never relented, this doubt and mistrust.  Thanks, Coen Brothers.

You see, in order for this film to be of any worth in terms of scaring its audience, that audience has got to believe it.  The audience has to buy it.  They have to give a damn.  And (sorry) I just don’t.  I think The Amityville Horror is still a solid film, and it will scare the hell out of people into the supernatural/religious horror genre.  James Brolin and Margot Kidder are terrific.  Brolin freaks me out if for no other reason than his unbelievable fixation on the ax he wields throughout much of the film.  And Kidder, well, she’s the perfect eye candy for a horror film, even if her character is a somewhat unsubstantial.

Bottom line?  After 30+ years, the effects in the film are still decent and the story of the Lutz family continues to attract people to the “original” home where the events supposedly took place (*see link below).

*The REAL story behind The Amityville Horror (spoiler: is it really based on a true story?)