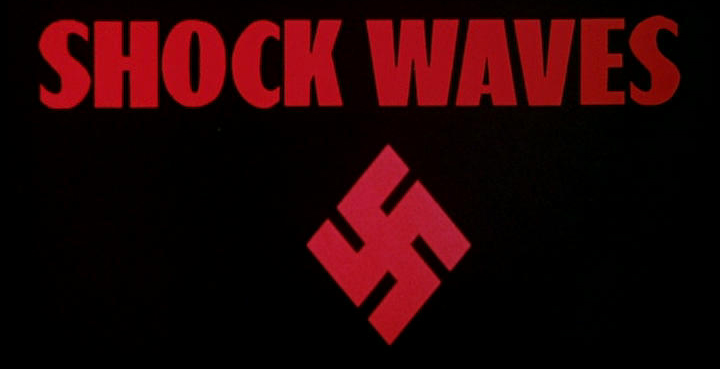 It’s the 70s, baby.  Six strangers on a reef diving adventure are about to get more than they paid for when their boat’s engine starts acting up and they run into the remains of a gnarly shipwreck.  Forced to disembark their water-filled boat, the group heads for a nearby island for help.  Their presence awakens something dark and deeply sinister from the bowels of the ocean – the Nazi Death Corps.   This group of undead soldiers, long forgotten by the outside world, rises to do the only thing they know how to do – kill.

scientist.  I mean, come on!  How much more of a set up do you need to create one of the most comically beloved cult classics in horror cinema?

It was the 70s and it seemed like everything was fair game.  In an era before everything had been done, filmmakers seemed to draw inspiration from everywhere (and anywhere).  And while the zombie genre had been long since established, Shock Waves differentiated itself by throwing Nazis into the mix.  It was one of the first – and it certainly wouldn’t be the last.  In the years and decades to come, Shock Waves would give way to films like the 2009 Norwegian film, Dead Snow and this year’s The 4th Reich.

The film stars Brooke Adams in an early role as the sole survivor of the events that unfold once the diving party is shipwrecked.  Adams would go on to star in larger, more commercially successful films like Invasion of the Body Snatchers, and The Dead Zone.  Adams’ onscreen presence in Shock Waves is undeniable … or, maybe, it’s just that she spends a good portion of her screen time in a string bikini.  Either way, she is definitely the star of the film.

Though it pains me to admit it, I’ll just come out and say what we’re all thinking.  Shock Waves is not going to be the kind of film you’re going to watch to be scared.  It has an almost excruciatingly slow build up characteristic of films from the period.  But if you allow yourself to go along for the ride – after all, I imagine that’s why Adams’ is scantily clad – you’ll enjoy some of genuine eeriness the film provides.

Forget for a moment that the diving party is being stalked by the newly risen undead Death Corps.  They’re still stranded on a remote island with a strange, and

The addition of the slow moving, stonily malevolent Death Corps works because they seem to stalk the island’s new inhabitants rather than converging on them, en masse, all at once.  The filmmakers made a great decision to show these Nazi troops rising from the ocean in small groups over and over, throughout the film, so that, by the end its audience has no idea how many of them there really are.

It’s strangely unnerving, in retrospect, to think of the diving party being hunted and picked off one by one.  Given more time to consider their options, the party begins to lose confidence in the odds of their survival.  After one night on the island, they begin to realize they need to take the situation into their own hands.

One of my frustrations with the film is that many things go relatively unexplained – whether that’s intentional or just a gap in the narrative of a low(er) budget film, remains to be seen.  The strange solar flare that happens while the party is still aboard their boat may or may not have caused the Death Corps to rise.  Regardless, it’s stylish and super fun.

So many questions.  I mean, how was Peter Cushing’s character, the Nazi Commander, surviving in this old resort?  Who are these people?  Who is Rose and why is she on vacation alone?  Where the hell are the Captain and Keith taking their guests?  Why do the Nazi troopers seem to “die” when their googles are removed?  Most importantly – why make Shock Waves in the first place?

I hate that most of the characters are completely undeveloped.  As a result, their motivations – beyond

those for survival – are unknown to us.  Told in a flashback narrative style, maybe it’s unimportant to give the audience any information.  After all, we know that only Brooke Adams’ Rose survives the experience.  Maybe we’re not supposed to give a damn about the rest of the cast.

Even if you can’t bring yourself to go all in for the film’s subject matter, the underwater cinematography is actually quite beautiful – if Nazi Zombies emerging from the tangles of various reef formations can be called beautiful, that is.

Made available on DVD in 2003, Shock Waves is worth a watch on an early Saturday afternoon, especially if you make it campy.  Throw on a pair of your shortest shorts, mix up some Sea Breezes, and embrace the grand 1970s doom vibe.