We recently received an email from director Niles Heckman about an amazing short he’s trying to finish through Kickstarter. It’s an ambitious project and a labor of love for him, hence the reason he’s using all his free time and money and home, to see this project to fruition. Seems to be a lot of really talented VFX artists of late are tired of waiting for a job to come along that would allow them to flex their visual prowess. Auroras, just happens to be, such a project, but as I mentioned in the title of this post, Auroras storyline touches on themes that are unlikely to be received by mainstream Hollywood at present, but we hope that’ll change soon.

In a metropolis at the north pole on planet Earth, a female cyborg (“The Occupant”) is called on a mandatory long term mission to travel along a space elevator through the Aurora Borealis to serve aboard Space Gate Auroras. Forced to leave her pregnant partner, another female cyborg (“The Loved One”), they say goodbye for an extended period. Two women, human or not, in love, are forced to separate and say goodbye for an extended period of time as one departs on a life changing journey to a place that redefines imagination.

After watching the Kickstarter video, I have to say, I was very impressed. I’m up for any science fiction that breaks new ground and touches on ideas facing the current world we live in. I would also like to mention his visual style, inspired by Japanese animator  Makoto Shinkai (The Garden of Words), can really be seen in many of the shots from the film. As always, we urge you to reach into your pockets to help this film make it’s goal. Whether it becomes hugely successful or goes straight to DVD (still a success on all accounts) and if your a science fiction fan and love to see forward thinking narratives, you owe it to yourself to give Auroras shot. 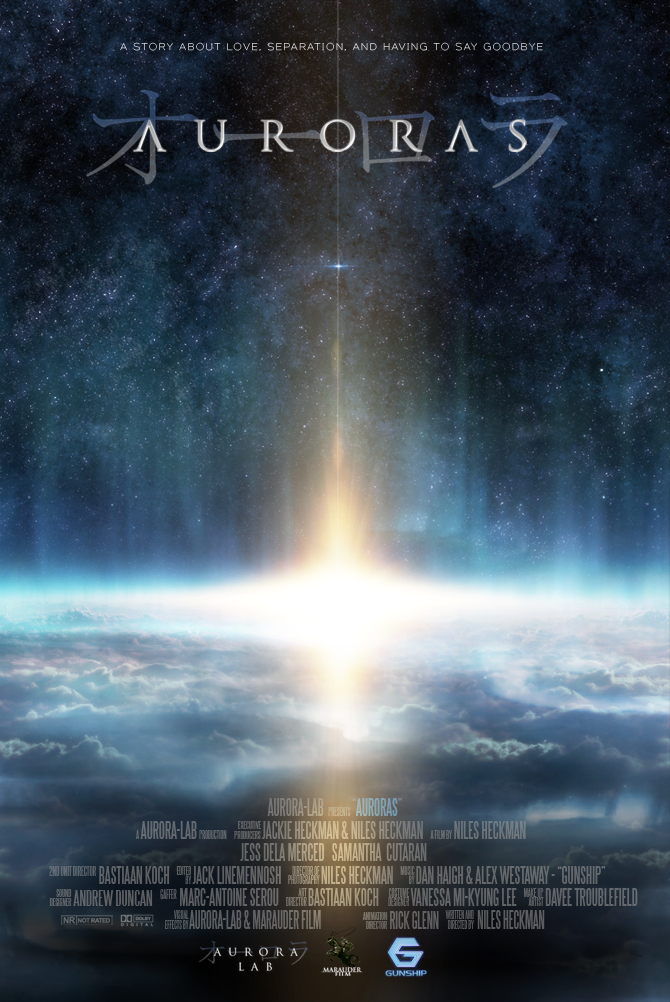