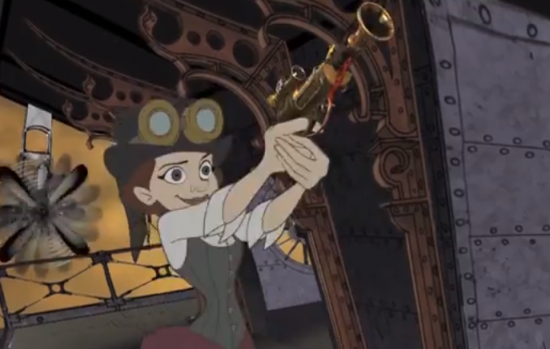 Oh Steampunk. I remember those days, back in 2010, when my wife and I would adorn our goggles, gloves and tricked out NERF Mavericks and head out to Steampunk gatherings. Those were the days. Then we slowly begin to realize how much it was going to cost to stay on the cutting edge of Steampunk fashion, but enough about that, this post is about shining light on an amazing project that needs our help. Hullabaloo is the brainchild of James Lopez (The Lion King, Pocahontas, Paperman) and Rick Farmiloe (The Little Mermaid, Beauty and the Beast, Aladdin) both very skilled Disney animators whose expertise oozes from the images you’ll see in the indiegogo video. In a addition to Rick and James there are others in the mouse-camp and abroad, who are showing and possibly lending their support to this project. Artist like Bruce Smith (Who Framed Roger Rabbit), Rick Farmiloe (The Little Mermaid, Aladdin, and Beauty and the Beast), Minkyu Lee (he Princess and The Frog and Frozen), Sandro Cleuzo (Enchanted, The Emperor’s New Groove, and The Princess and The Frog), Sarah Airriess (The Princess and the Frog, Wreck-It Ralph), Alexa Summerfield Goriup (Prince of Egypt, Spirit -Stallion of the Cimarron, and Sinbad – Legend of the Seven Seas) and Joffery Black CG Modeler (Spongebob, WALL-E, UP, and The Incredibles),   Quite frankly, I don’t know how all this is getting done considering the kung fu grip the mouse has on most of it’s animators, but I am wishing them the best.

UPDATE: They have reached their goal of $80,000.00 in fact they’ve surpassed it. As it stands the film has $180,000.00, not too shabby, but they can always use more. This isn’t just about giving Steampunk a much needed boost, but it’s is also about keeping the art of 2d hand drawn animation alive. This is a no-brainer folks!

Hullabaloo’ is the story of Veronica Daring, a brilliant young scientist who returns home from an elite finishing school to find her father–the eccentric inventor Jonathan Daring–missing without a trace! The only clue left behind points Veronica toward Daring Adventures, an abandoned amusement park used by her father to test his fantastical steam-powered inventions. There she discovers a strange girl named Jules, a fellow inventor who agrees to help Veronica in locating her missing father and discovering the secrets of his work.