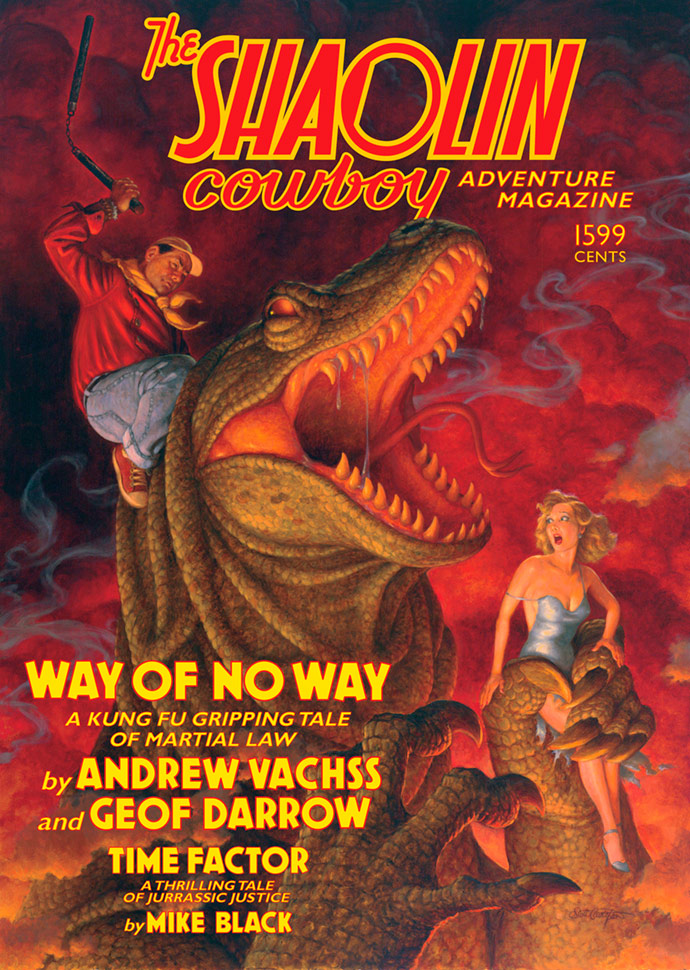 I became a fan of Geof Darrow‘s work because it reminded of his mentor’s work Moebius, whom he gladly credits as being one of the inspirations behind his work. Geof’s career reads like a movie when you consider how many artist he’s had the opportunity to work with or meet. Artists like Jack Kirby, Tezuka Osamu and Frank Miller have all at one time worked with Geoff putting out such works as Hard Boiled (a collaboration between Geof and Frank Miller) and TRON (a film that Moebius brought Geof in on to give him a hand with concepts). Geof also paired up with The Wachowski’s to do concepts for all three Matrix films and Speed Racer.

With all that, it’s a tragedy that I’ve only now heard of  him, but I know you guys won’t hold it against me, especially not after I’ve confessed my naivety.

There’s no denying his skills as an illustrator. There are very few artist that have the kind of understanding of movement and detail as Geoff. The only other artist I can think off with the same level of detail in his work is Korean artist Kim Jung Gi

However great art does not a story make. Let me start off by saying, Geof’s imagination knows no bounds in Shaolin Cowboy #1. The world is strange and very original, but for all the unique and fascinating characters and environment’s he presents there weren’t any illustrations for half of them. Some of the illustrations didn’t even pertain to the chapter at hand. They seemed like works Geof might’ve had in his arsenal and just decided “this is a cool one to put in the book”. Which is all fine and dandy, but these random images kept pulling me away from the storyline. There were amazingly written scenes in some of the chapters that I thought “man, I really wish I could see what this looked like” and for such a talented artist, I thought I might.

I wasn’t on the edge of my seat waiting for this book to come out, so if it had taken him another ten years, because of all the extensive artwork, I would’ve been non the wiser. When I think graphic novel, I tend to want more imagery than I got. That’s not to say it wasn’t an enjoyable read.  The monk and his trusty mule are funny in that “Taoistic” way. I love how he dispenses justice “just like that”. His victims don’t ever seem to learn as they talk themselves into quick and gruesome deaths.  I do have a bone to pick with Geof though and how he came at the hippies in this book. I don’t know if that’s how he truly feels regarding environmentalist, but if it is…me and him need to have a sit down. The Shaolin Cowboy’s face is creepy and sublime like that mask worn in those Chinese New Year Lion Dance’s. The huge eye brows and subtle smirk can be a tad strange, but it’s that face (which is exquisitely designed) that makes the monk and his world so oddly unique. He’s not your typical vigilante nor is his thugged-out  horny donkey, who totes a sizable amount of weaponry on it’s back. Weapons that aren’t your typical scimitars and swords mind you, which again makes this meditation on violence and fantasy, a cult classic. I am excited about the next book and the new ways Geof thinks of how to kill people, but my only hope is that it’s a full panel to panel graphic novel this time.

2 thoughts on “Shaolin Cowboy is the craziest trade I’ve ever read, but not seen”