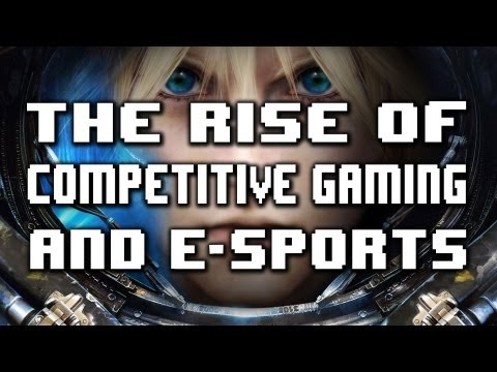 Since I’m on a roll with these Off Book episodes, let me go on ahead and post another one for you. This one talks about the monster that is E-Gaming. From Street Fighter and Call of Duty to World of Warcraft  and League of Legends, there’s no denying how far we’ve come in truly interactive/competitive e-gaming. This spot focuses on the future of competitive gaming, where it came from and how business are falling over themselves trying to get it into the mainstream. As an online gamer myself, I very much look forward to the day when spectator gaming competitions are as common and as big as football. This would force companies like Pepsi to get involved and when shit like that happens, it’s all over. To all my nerds…we will have our day.

As games have increased in sophistication, they have become a stage for ever higher displays of human skill and brilliance. The result is a tier of the gaming world filled with startling disciplined, talented, and highly competitive players. Born out of arcade tournaments and LAN parties, the world of competitive gaming is now entering a mature phase, featuring major global events attended by thousands and watched by millions online. With valuable sponsorship and prize money of increasing value, competitive gaming is claiming a space similar to that of traditional sports. This new industry is still in its early stages, developing broadcasting models and negotiating the culture of its widening audience. But whether it’s fighting games or MOBAs, the players and spectators are passionate, and individuals and leagues are working hard to elevate e-sports into the highest echelons of human achievement.